Last night’s class discussion focused on big data and how it has disrupted the status quo of what was once considered normal. We examined its effect on banking, education, health and fitness, and retail. Needless to say, big data has transformed all of these industries and our lives in both structured and unstructured ways.

While I’m supposed to be reflecting on our class discussion, what stuck with me from last night is what happened after class ended. I decided to watch the livestream of astronaut Scott Kelly’s return to earth onboard the Soyuz space capsule. 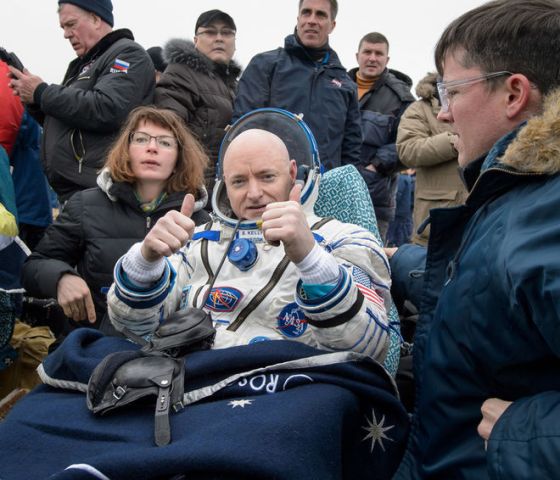 After all these years I had grown used to NASA’s space shuttles using aircraft technology to land on a runway. Spectators and the media would view and report from a safe distance.

Watching the Soyuz capsule parachute out of the sky and land on a barren field in Khazikstan brought back memories of the early years of the Apollo missions when command modules re-entered the earth by splashing down into the ocean. For all the talk about recent technology transforming our lives, it’s interesting to note the Soyuz spacecraft hasn’t disrupted the status quo. It really hasn’t changed much over the past 50 years. A BBC news article  refers to the Soyuz as “the space equivalent of a white van or pick-up truck. It’s built to do a job.” Meanwhile, NASA’s space shuttles have been retired.

It wasn’t just the Soyuz that fascinated me. Once on the ground, Commander Kelly and the cosmonauts were physically pulled from the capsule which was completely surrounded by photographers and videographers. As soon as each man was pulled out he was carried over to a nearby recliner and wrapped in a blanket. One of the cosmonauts looked slightly motion sick.

While Scott Kelly kept saying how amazing the fresh air felt,  I kept thinking there is something so delightfully refreshing yet old school about watching this. There were no press ropes keeping the photographers at bay. There were no specially designed images or messages. It was just three space travelers sitting in recliners out in an open field for all the world to see.

It made me realize sometimes transformation can be overrated.