The Future is Now

We had some fun during this week’s class when we went into the “wayback machine” and took a look at a Newsweek article from 1995 about the internet.

It was originally titled, “The Internet? Bah!” and in recent years updated online to “Why the Web Won’t be Nirvana.” The author, Clifford Stoll, a computer expert, gives his assessment of the burgeoning technology calling it both “trendy” and “oversold”.

While visionaries at the time predicted a future including telecommuting, virtual communities and online shopping, Stoll wasn’t buying it. He couldn’t imagine an online data base taking the place of newspapers, books and even a trip to the mall.

It’s easy to laugh at his lack of foresight, but can we even fathom where this technology is headed? Look at how the predictions Stoll wrote about actually became a reality in just twenty years. The technology continues to evolve at an amazing pace and it is transforming our lives both at work and home.

This transformation has been referred to as the Fourth Industrial Revolution and is the theme at this year’s World Economic Forum. 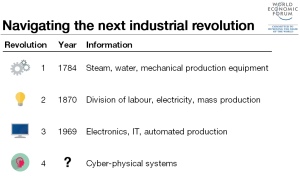 “We stand on the brink of a technological revolution that will fundamentally alter the way we live, work, and relate to one another. In its scale, scope, and complexity, the transformation will be unlike anything humankind has experienced before.”

The visionaries of today predict the rise of robots and artificial intelligence which will reduce the need for human intervention. They say this will have all kinds of implications in business, government and how we as humans interact with each other.

You don’t need to be Clifford Stoll to feel a little overwhelmed trying to wrap your head around that.